Japan's Prime Minister Shinzo Abe held talks with top Israeli officials in Jerusalem on Monday in a bid to deepen economic cooperation while also bringing a tough message on peace.Abe said Tokyo would continue to have an "active engagement" in efforts to broker peace in the region as he held separate talks with Prime Minister Benjamin Netanyahu and President Reuven Rivlin.

His visit to Israel, the first by a Japanese premier since 2006, is primarily aimed at bolstering the bilateral relationship, particularly in the economic sphere.

But Abe, who travels Tuesday to the West Bank town of Ramallah, said he was also to give some tough advice to both Israel and the Palestinians.

"As a genuine friend, I might offer advice that may not be easy to swallow to both of the parties," he told reporters on meeting Netanyahu.

He did not elaborate further but the embassy said he would be urging both sides to find ways to return to the negotiating table after the collapse nine months ago of the latest round of peace talks.

Speaking to AFP, a Japanese government official said Abe would communicate the same message to both sides.

"The prime minister... believes that hatred does not help anything, and that both sides should refrain from taking unilateral actions that would exacerbate the situation... and (undermine) the two-state solution," he said on condition of anonymity. 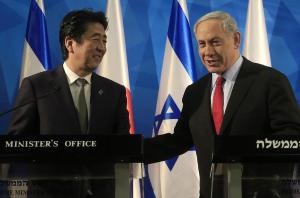 For Israel, this referred to "issues like the settlements" as well as to the Jewish state's freezing of Palestinian tax monies.

Earlier this month, Israel blocked the transfer of $127 million to Ramallah as a punitive measure after the Palestinians applied to join the International Criminal Court where they can potentially sue Israel for alleged war crimes.

The move drew sharp international criticism, including from the United States and the European Union.

Both issues are likely to come up when Abe meets Palestinian leader Mahmud Abbas in Ramallah on Tuesday.

"In terms of the Palestinians ... becoming a member (of the ICC) and the indictment of Israelis does not really help to pursue this (two-state) solution," the Japanese official told AFP.

"He would say that both sides should refrain from taking these actions."

At the start of the meeting with Abe, Netanyahu said Israel would continue to defend itself against any threats and would not be deterred by the ICC, which has begun a preliminary examination of a Palestinian complaint relating to Israeli actions last year.

"Israel is adamant that it will have the right to defend itself against all those who wish to propagate terror and other attacks against its citizens, against its territory," he said.

"We will not have our hands tied by anyone, including the ICC. We will do what is necessary to defend ourselves wherever we need to do so."

Earlier, Abe visited the Yad Vashem Holocaust museum in Jerusalem as the world marks 70 years since the end of the Nazi genocide.

"This year as we mark the 70th anniversary of the end of World War II and the liberation of Auschwitz, I make a pledge that we should never ever let such tragedies be repeated," he said.

"Today, I have learned how merciless humans can be by singling out a group of people and making that group the object of discrimination and hatred," he said after laying a wreath in the Hall of Remembrance and restoked the "eternal flame" as is customary for international leaders and diplomats visiting the site.

He also paid tribute to late Japanese diplomat Chiune Sempo Sugihara, who is known one of the "righteous among the gentiles" who gave travel documents to some 3,500 Jews trying to escape the Nazis while posted to Lithuania, and in whose honour a tree is planted at Yad Vashem.

After meeting Abbas in the West Bank on Tuesday, Abe will return to Japan, wrapping up a six-day tour of the region which began with a visit to Egypt and Jordan.

The militant group Islamic State released an online video on Tuesday purporting to show two Japanese captives and threatening to kill them unless it received $200 million in ransom.

A black-clad figure with a knife, standing in a barren landscape along with two kneeling men wearing orange clothing, said the Japanese public had 72 hours to pressure their government to stop its "foolish" support for the U.S.-led coalition waging a military campaign against Islamic State.

The militant, who spoke in English, demanded "200 million" without specifying a currency, but an Arabic subtitle identified it as U.S. dollars.

The footage named the men as Haruna Yukawa and Kenji Goto.

The video was not dated, but on a visit to Cairo on Jan. 17, Japanese Prime Minister Shinzo Abe pledged around $200 million in non-military assistance for countries battling Islamic State.

Abe, speaking in Jerusalem on Tuesday towards the end of a six-day tour of the Middle East, said Islamic State's threat against the two purported captives was "unacceptable".

"We strongly demand the immediate release of the Japanese citizens unharmed," Abe said. "The international community needs to respond firmly and cooperate without caving into terrorism."

The video resembled others distributed by Islamic State outlets in which captives were threatened or killed. It appeared to be the first time that an Islamic State video specifically demanded cash for captives.

Abe stressed that Japan's aid announced on his trip was for humanitarian purposes, and said Tokyo would keep contributing to peace and prosperity in the region.

"We'll coordinate with the international community from now on, and contribute more to (the) peace and prosperity of the region. This policy is unwavering and we won't change this policy."

The apparent capture of the two men marks the first hostage crisis for Abe's government since January 2013, when 10 Japanese were killed by Islamist militants at a gas complex in Algeria.

Asked whether Japan would pay ransom to secure the captives' release, Abe replied: "With regard to this case, we attach the utmost priority to saving lives, and gathering information with the help of other countries."

In Tokyo, Japan's foreign ministry said it was checking the video to see whether the footage was genuine. Cabinet ministers also announced they were meeting to discuss the government's response to the video.

Goto is a freelance reporter who was based in Tokyo. He has written books on AIDS and children in war zones from Afghanistan to Africa and reported for news broadcasters in Japan.

Goto met Yukawa last year and helped him travel to Iraq in June, he told Reuters in August.

Yukawa, 43, traveled to Iraq and Syria last year after telling friends and family that he thought it represented a last chance to turn his life around.

Over the previous decade, he had lost a business to bankruptcy, lost his wife to cancer and become homeless, according to his father and an online journal.

It was not clear what exactly he was doing in the region. Yukawa's father, Shoichi Yukawa, declined to comment, saying he was overwhelmed by the news reports.

The militant in the footage, who spoke with a British accent, appeared to have the same voice as a jihadist shown with captives in previous Islamic State videos.

The hardline Islamist group, which holds territory in Syria and Iraq, has also killed more than 1,000 Syrians off the battlefield since it expanded a caliphate under its control in June, according to a monitoring group.

The Diplomatic Club | All rights reserved |